A Hard Time for a Great Cow 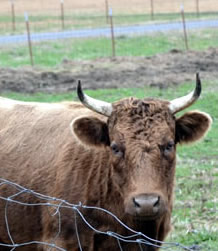 Cassidy is one our best cows. I measure that judgement by temperament. Because she is so amiable, we nicknamed her girlfriend.

If I were not emotionally attached to her, she would be on the harvesting schedule because she has a persistent birthing problem. When she gives birth, her milk comes in too quickly and in too great a volume.  What that means is that her teats swell up so large that the calf can’t get on them to nurse.

They also get sore, which means she doesn’t want the calf or anyone else touching her.

In the past, we have physically restrained her and milked her until the teats were empty.  I got kicked a couple of times before I figured out how to hobble her, but at least things worked out.

This year things were much worse.  Even though we milked her, the mastitis set in with the swelling. Mastitis has a number of causes and one common to grazing cattle is caused by bacteria introduced into the udder by flies.  Especially in cows leaking milk, the transmission can easily happen. It doesn’t respond very well to antibiotics.

In severe cases, the udder may swell to the point of bursting.  This happened to two of Cassidy’s teats.  The vet told me not to sew it up.  Rather, try to keep the flies off, which is next to impossible.  What he didn’t tell me was that the teats would slough off.  The mammary glands literally fell out.  The smell was bad, but no gangrene set in.  She appears to be on the way to healing, but I have reservations about her future.