Aidan and the 20 Pound Kurkey 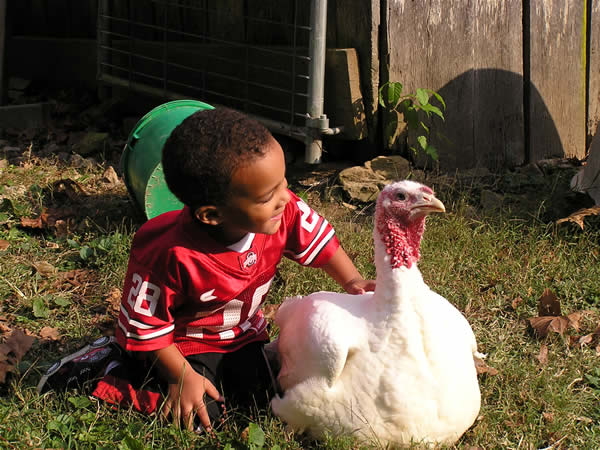 It all began when my neighbor called to ask “Would you be willing to split a chicken order with me?”  “I will get them started and bring you your half at six weeks.”

I could not turn that offer down because we are constantly needing to replenish our hen supply and she was willing to do the hard part of getting them started.

Chicken orders from commercial nurseries usually require a minimum of 25 chicks. That way the body heat keeps them alive during shipment through the U.S. Postal system; a practice I admire and praise the Post Office for performing.

Six weeks later she called to say, “Your chicks are ready. By the way, I also ordered the “surprise package.” Your half of the surprise package is five organic turkeys.

My enthusiasm for the project diminished somewhat, because I knew what to expect. American, domestic, raised for consumption turkeys are an example of how NOT to improve genetics through breeding. They are large breasted birds that at full weight can barely walk around. They are so large that they can’t breed, but must be artificially inseminated. Imagine putting that job on your resume. Plus, turkeys are just looking for a reason to die. Even when vaccinated, a process whose efficacy I question, you can expect a high mortality rate.

My five turkeys showed up with three females and two males 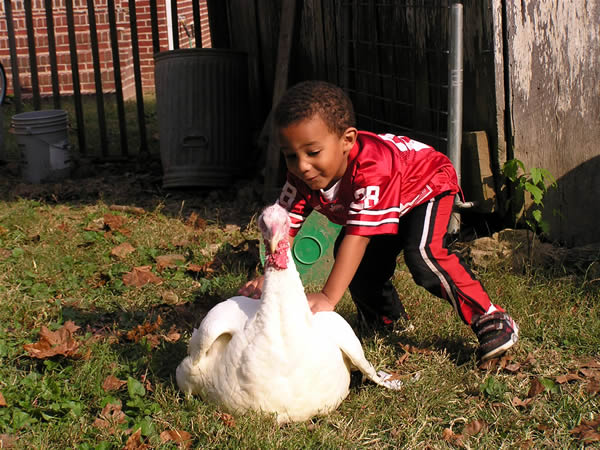 Fast forward 5 months and we had one female turkey left alive. My grandson, Aidan, fell in love with her and named her “Kurkey.” Note to self, don’t let the kids name food animals.

Every time he came over he wanted to play with her. He would pet her, which she tolerated with much grace, and follow her around the yard. Did I mention that turkeys crank out poop on a grand scale? The yard looked like we had a gaggle of geese.

“Kurkey” was destined for the Thanksgiving dinner table until my wife looked at me and said, “You know you can’t kill that boy’s turkey.

I don’t want farm pets, so when Kurkey started laying marvelous eggs, I said, “As long as she’s producing eggs, she has a job and can stay.” So, Kurkey got a Thanksgiving reprieve.

Remember what I said about turkeys looking for a reason to die? It was the week after Christmas and I came home to find that Kurkey had managed to break her neck while flying over the fence.

Her body was still warm when I found her, so rather than waste her, I cleaned and cooked her. Marsha would not eat the turkey, but I did.

I told Aidan the cold, hard truth, to which he replied, “Okay.” And that was the end of the story.