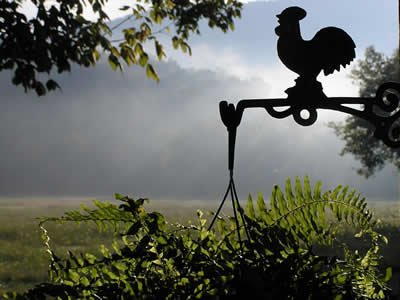 Residents will argue over which way into the Paint Rock Valley is the most scenic. Some prefer to head north on Alabama state highway 65 from Gurley. Others may go through Skyline on the way to Estillfork, Larkin or Princeton. Still others visit the Walls of Jericho. It’s hard to find a spot that doesn’t reflect a pristine beauty.

it, the distance to the top of the waterfall lip is almost 50 feet.

Fanning Cove is framed by Hodge Mountain to the North and Maxwell mountain to the South. Our Eastern view includes Round Mountain, Miller Mountain, Larkin Mountain and a portion of Brewer Mountain. Indicated elevations are 1600 feet ASL on the Google Topo Maps.

The geologic formations of this area are remarkable. Caves and sinkholes catacomb certain areas. Blowing Cave is located about a mile West of us. Many cavers visit Russel Cave, which is farther North. 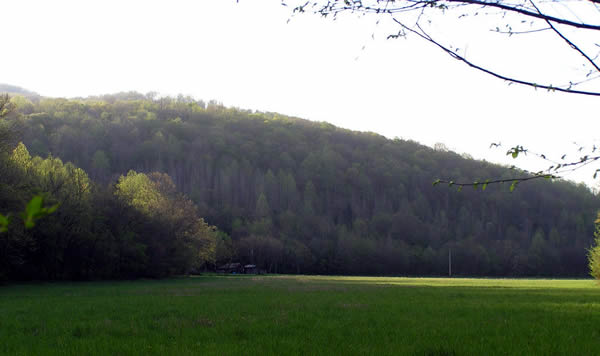 The sunrise over Larkin mountain is such a powerful show that the people who invented “Stonehenge” have asked for rights to build something here.

Some days the sun teases its way through the trees. The effect makes one feel that there is “fire on the mountain”. On other days, the clouds dance over the ridge and down to the valley in a gossamer cascade that needs only Tchaikovsky’s music to be complete.

In Spring, Edvard Grieg’s “Mountain King” calls from beyond the trees. 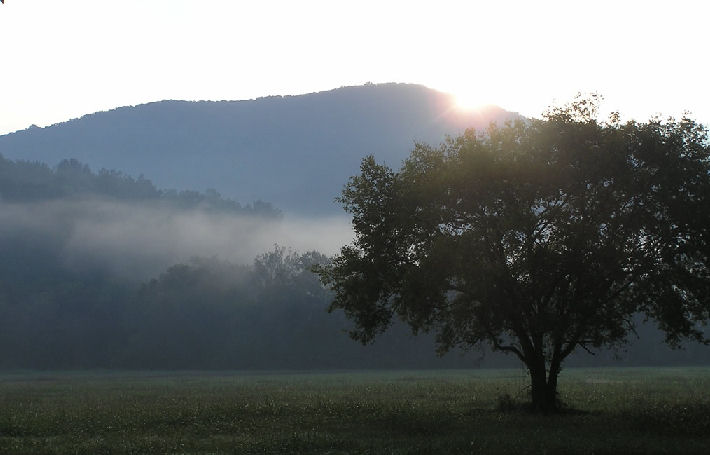 Beauty at Every Turn 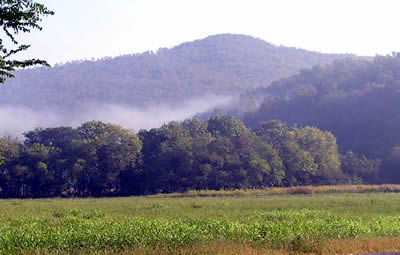 The convergence of these mountain ridges makes possible the beautiful waterfalls. This valley also creates its own micro-climate. We receive more annual rainfall than Huntsville, Al and are generally 5 to 7 degrees cooler.

The combination of extra moisture and cooler temperatures makes for some really foggy mornings, hence the farm’s name.

In the space of an hour one becomes aware of the remarkable bio-diversity of the area. Within one-half of a mile of the farm we have seen snapping turtles, blue herons, deer, fresh water clams, crawdad, wild turkeys, foxes, coyotes, wolves, bobcat and teenagers.

And now that the North Alabama Electric Coop has brought us fiber optic internet, we have enough bandwidth to stream you some spring time views. 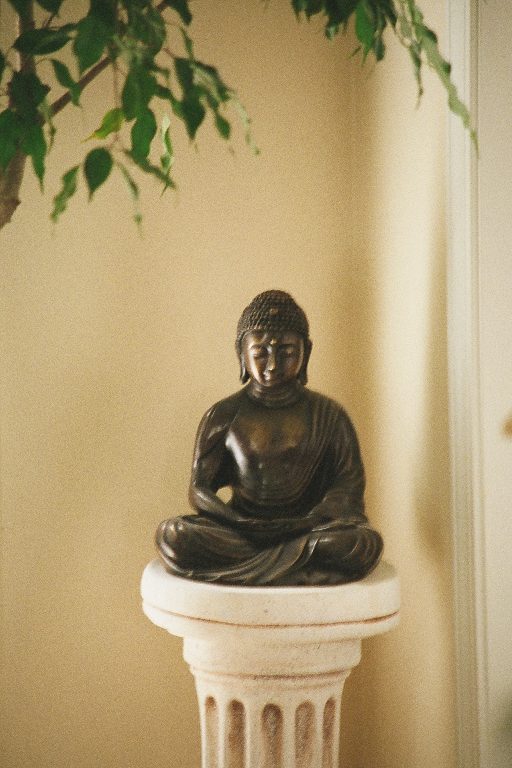 It’s a Place Where Serenity Escapes the Boundaries.

Our hay fields yielded more than we could use during a past year. We thought about selling the excess, but decided to send it to a friend. There is an immediate benefit in that our friend has the food his cattle needed. However, there is also a goodie there for us. We expect to buy cattle from him. Since they have been eating food from our place, they will have already established a “rumen population” that thrives on what we grow. Cattle raised within 25 miles of their place of birth are more disease resistant.

How do you place a price on beauty?

Every year the beauty of the farm surprises me.

Sometimes it is through bursts of color, such as the ides of March, better known here as Virginia Bluebell time. At other times it seeps in through the subtle fall shadings of denuded trees and mown hay fields.

So, know what feels great after a day of mowing hay? A really hot shower with some Dr. Bronner’s Mint Soap. Yes, it’s the one with the eccentric sayings on the side. It was organic before there even was an organic label 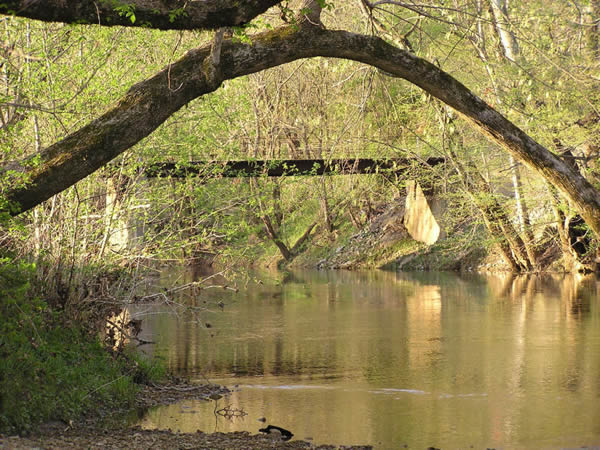 The Larkin Fork is one of two major tributaries that form the Paint Rock River.

On its banks we have found a myriad of flowers, fresh water clams, endangered snails, crawfish and a variety of “critters” that seem to be unique to the Paint Rock Valley.

Our friends at The Nature Conservancy have done extensive work on identifying the life that seems to be unique to this part of Alabama. They were also instrumental in preserving the “Walls of Jericho”. You can read about their work or contact us for more information.

The water that flows by our farm actually makes it to the Roy B. Whitaker Preserve.

The Larkin Fork jumps its banks on the North end, crosses the hay field and flows back into itself a quarter mile farther South. 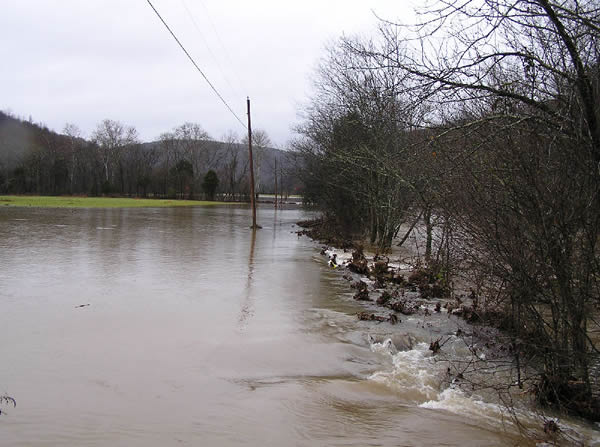 The Larkin Fork at flood stage

The lesson one learns in this situation is to use high tensile wire for fencing, not woven wire. And, plan in a few “sacrifice posts to appease the river gods. 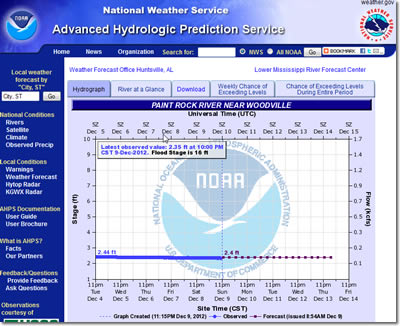 You can always check on the flood stages for highways 65 and 72 at NOAA. 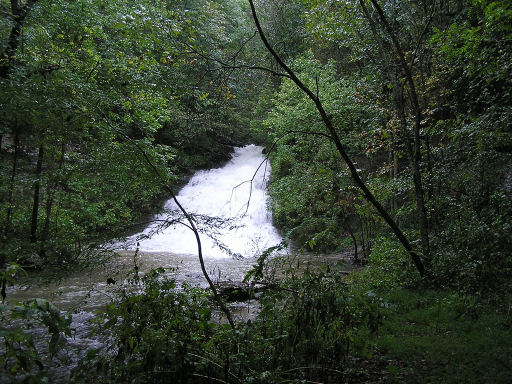 Rain from the mountains feeds the waterfall year round.

A more moderate flow allows the kids to play. 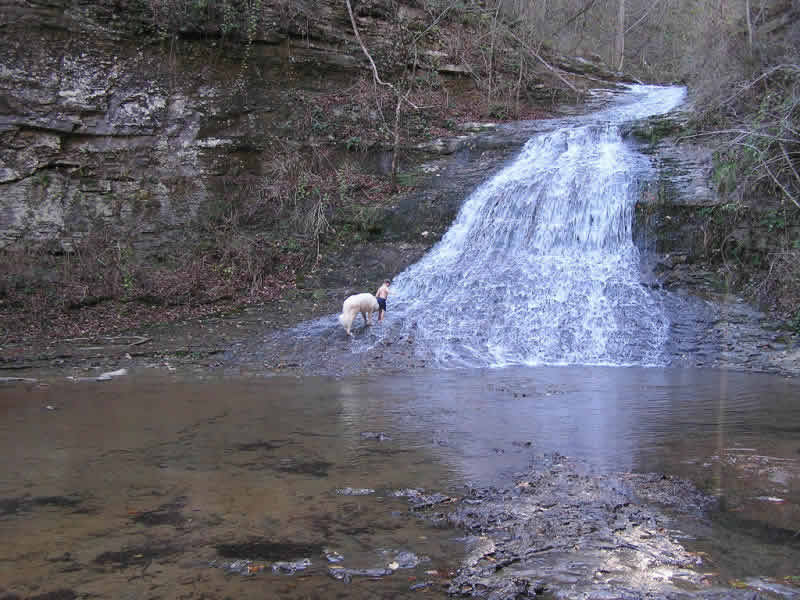 Although the picture may not show it, the distance to the top of the waterfall lip is almost 50 feet.