Probiotics are about more than just food. 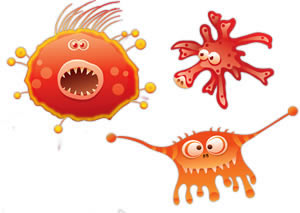 Media marketing has a way of overwhelming every good discussion.  A few years ago the public began to discover “pro-biotics.” Probiotics became defined in that context as foods that contain beneficial bacteria, which your body needs to survive.  This was no small achievement because the advertising for products like Lysol had so conditioned the general public to fear any and all living creatures smaller than a human hair, that the public had taken on a “war against all creatures that we can’t see mentality.” And so, we made the first step towards sanity about interacting with the world at large.  Granted the nightly news still publishes the “health inspector” scores, not realizing the name “health inspector” is a real misnomer.  How else does one explain things “Mountain Dew” and “Cheetos.” But at least we are learning to probe deeper into the ideas that present themselves concerning food and health.

You Need More Stink in Your Life.

I am always amused when people comment about how “they could never live on a farm because of the smell”. What smell?

Granted, factory confinement facilities stink to high heaven. But a real farm that has the proper “poop to plant” ratio has little odor. Still, there is some. I have always tried to explain to my children that everyone needs “more stink in their life.”

By that I mean that the American illusion of an antiseptic, pristine, odorless world is fine for Disney movies, but far from reality. Moreover, it is not healthy. It is the interaction with all the forms of life that grow in our environment that let us become stronger, healthier creatures.

You don’t need antibiotics and flu shots if your immune system is geared up to fight off the pathogens. It gets that way from good nutrition and from exposure to the real world.

For details See Dr. Mercola. And then, make sure that your kids go outside and play in the dirt.

I was always amused as a child at how television would disparage the open markets of foreign countries as “unsanitary.”  There would be slaughtered ducks hanging in the open stalls, all kinds of foods available in unrefrigerated containers and flies and dust everywhere.  And yet, the general population seemed to be doing well.  Now I am not advocating dirty stores.  One I am trying to illustrate is that these cultures worked because the populations were hardened against pathogens by exposure to them.

Because we no longer see the animals we consume until they are wrapped in plastic and arranged in chilled display cases, we become disconnected from our food, Not only do we lack the benefits of being around the animals, we also lack an appreciation for the lives they lead.

Because we do not pause to reflect on the sacrifices that make our food possible, both animal and human, we become callous consumers.

It is a lazy way to live and as my dad used to say “it’s just sorry.”